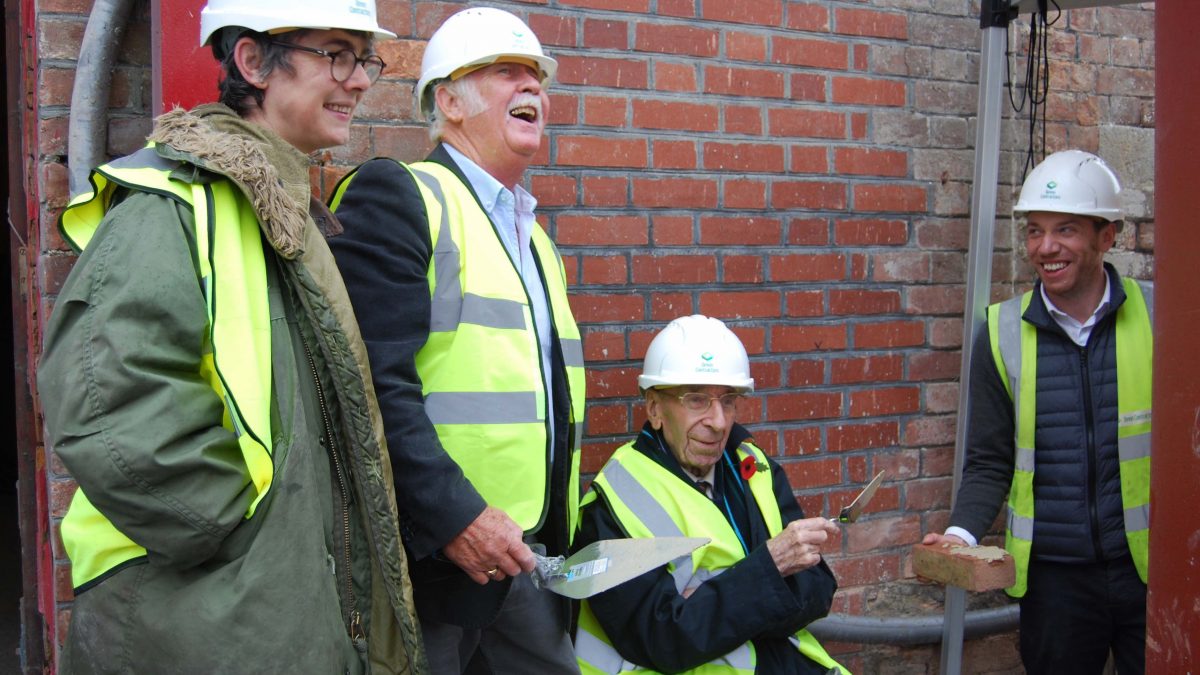 Today (Wednesday 7 November) marks a significant milestone in the history of the Museum of Barnstaple and North Devon, as the first brick of its new extension is laid.

Keith Abraham, local philanthropist and one of the museum’s most generous supporters, had the honour of laying the first brick in the 2m Long Bridge Wing extension, which will transform the museum and increase its footprint by 70%.

Independent Devon Contractors are the main contractors and building work began in June with the demolition of the old coach house and groundworks. The steel frame has just been completed and a great deal of work has also been going on behind the scenes in the existing building, moving and planning new exhibitions for the future.

Councillor Dick Jones, Executive Member for Parks, Leisure and Culture says: “It’s thrilling to see how much progress has already been made on the build and it was fitting for Mr Abraham to have the honour of laying the first brick, as he has been so supportive of the museum over the years and has made significant contributions to this project. Things are really coming together and the building’s prominent position means residents and visitors to the town have a great view of the new build as it progresses, it’s really exciting to watch to museum grow!”

Keith Abraham says: “I first started going to the Athanaeum (as it was then) when I was Mayor of Barnstaple and looked in the old newspapers for stories to use in my speeches. This is a terrific project for the town – we’ve worked as a team and I’m really looking forward to the museum reopening next year. My favourite expression for many years is “you can’t take travellers cheques when you die!”

Stuart O’Higgins, Contracts Manager – Devon Contractors said: “We were delighted to be appointed for these works by North Devon Council, and to be a major part of the Long Bridge Wing extension for this important local and historical landmark.”

Whilst the main museum remains closed, you can visit the Pop-Up museum across the road at Bridge Chambers, where stories and collections are being gathered for the new Social History Gallery. The Pop-Up is open from Monday to Saturday from 9am to 4pm.

For behind the scenes updates and progress of the build, follow the Museum Manager’s blog at barnstaplemuseumblog.wordpress.com. You can contact the museum on 01271 346747, museum@northdevon.gov.uk or get in touch on the museum Facebook page.

The main funders of the museum extension project include Fullabrook CIC, Garfield Weston Foundation, Coastal Communities Fund, Heritage Lottery Fund, North Devon Council, the Foyle Foundation and Arts Council England.If you would like to support the extension project, you can still donate by popping in to the museum and completing a donation form to buy a brick or a named floor tile. You can also donate online. Go to mbndtrust.org and click on the yellow ‘donate’ button. For more information about corporate sponsorship contact the museum on 01271 346747 or email museum@northdevon.gov.uk.

Read all about it: North Devon Gazette online