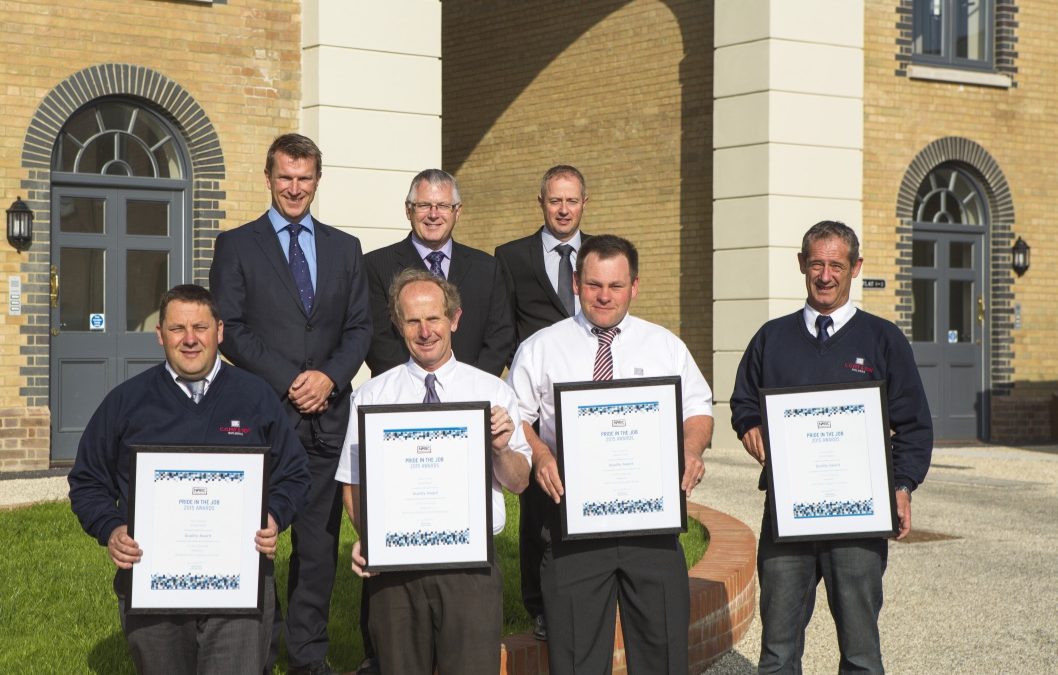 C G Fry & Son Ltd., is celebrating receiving multiple awards across four of their South West developments for another year.The Independent developer was publicly recognised with National House Building Council, (NHBC) ‘Pride in the Job 2015’ quality awards in the medium house builder category with four individual Fry’s site managers from Dorset, Somerset and Wiltshire each winning the award out of an initial pool of circa 15,000. Nathan PyettGrey’s Field, Chickerell and Steve Walker for the North East Quadrant at Poundbury, Dorchester;Adrian WhiteWyndham Place, Tisbury and David PillingerFern Green, Langport, were all recognised for ‘Pride in the Job’.

Pride in the Job is the house-building industry’s most prestigious awards programme.It recognises the UK’s best site managers who achieve the highest standards in house-building and has been instrumental in driving up the quality of new homes for 35 years.The judging process lasts 12 months to ensure that site managers are assessed at every stage of the build.

The winning C G Fry & Son site managers went on to attend the South West Regional Award ceremony held on September 4th at Sandy Park – home to Exeter Chiefs.There were more celebrations as the two winning Dorset site managers, Steve Walker and Nathan Pyett picked up a ‘Seal of Excellence’.Nathan, no stranger to awards having won numerous accolades for the company, was awarded ‘Seal of Excellence’ for Grey’s Field near Weymouth.Located within walking distance of Chickerell, the site will be a mixture of terrace houses, semi and detached homes.Nathan comments: “I am very pleased to again be recognised in the NHBC Quality Awards and to win Seal of Excellence is an honour.This is a reflection of the high quality finish C G Fry & Son achieve on all their developments.I want to take this opportunity to pass on my grateful thanks to my hardworking team, from assistants to the sub-team and workforce for all their support which has made this possible.”

From the Seal of Excellence winners in each region, one overall Regional Winner is selected in each of the five builder categories; and there were further celebrations for C G Fry & Son when Steve Walker received the coveted ‘South West Region Winner’ award for a medium sized company.Steve will go through to the final Supreme Awards presented at the gala ceremony in London in January for the prestigious Poundbury development. The Duchy of Cornwall development has been a NHBC award-winning site for C G Fry & Son, no less than six times, with site manager Steve Walker winning NHBC awards on five of these occasions, and for the last three consecutive years, collecting the Regional Winner award.

Housing and Planning Minister Brandon Lewis said: “As I saw for myself last November Poundbury is a great example of a truly mixed community, combining affordable and open market housing and all built to excellent design standards. It’s places like Poundbury that drive me to want to push up not just building the new homes we need but the look and quality of them, so people everywhere in the country can benefit from high quality housing. I congratulate everyone involved in making this a great place to live.”

Steve commenced as project manager at Poundbury in October 1993 and last year he was awarded a ‘Seal of Excellence’ for the South West Quadrant and went on to win the regional award.This year Steve has won the ‘Pride in the Job’ regional ward for the North East Quadrant which has well-designed open spaces integrating a range of recreation, play and community space for both residents and workers.The latest quota of new homes at Poundbury is a mix of classical and vernacular styled properties that range from five bedroom houses to one bedroom apartments.

Steve Walker Site Manager C G Fry & Son Poundbury comments: “I am overjoyed to yet again be recognised as the South West Regional winner for Poundbury, as a result of working as part of a great team. The challenge now is to continue the exceptional quality of build and attention to detail that has become a hallmark of the C G Fry & Son brand and the company’s reputation.I am very much looking forward to the Supreme Awards in the New Year.”

NHBC is the UK’s leading new-home warranty provider. Jim Lyons, NHBC Regional Director, congratulated Steve on his win: “I have visited hundreds of sites, and to reach this level of the competition means without question you have to be the elite of this industry. Steve is building homes of a very high standard, and is worthy of the title South West’s Regional winner in the Medium Builder category. At NHBC we believe that recognising the workmanship of the best site managers plays an important role in bringing high quality homes to consumers, creating homes we are proud to live in.”

Kevin Murch, Construction Director C G Fry & Son Ltd concludes: “C G Fry & Son is delighted to yet again be recognised by the well-respected NHBC with multi-awards for site managers across the region. It gives me a great feeling of job satisfaction knowing all of the hard work my team put in to delivering a quality home for our purchasers to live in, is being publicly recognised by the NHBC and I’m extremely proud of all four of our site managers.This is the 6th year running that as a company we have collected the regional award, and Steve himself has won this three years running. We all wish Steve every success to win the overall national award at the Supreme awards ceremony taking place on 15 January 2016 at the Park Plaza Westminster Bridge Hotel in London – it’s an excellent achievement and very much deserved.”

See coverage in the Dorset Echo