When do children become financially responsible? 18 is too young, according to new research… 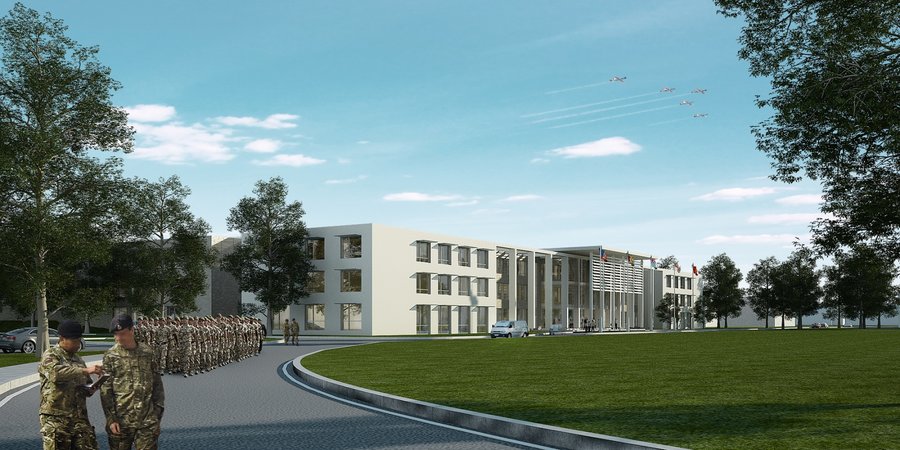 The 250 million Defence College of Logistics, Policing and Administration (DCPLA) at Worthy Down in Hampshire has received planning approval through delegated powers from Winchester City Council, marking the second and final application for the scheme known as Project Wellesley. HLM with an office in Plymouth, has designed the 1,000,000 sq. ft. scheme (in partnership with Skanska), which is part of a Ministry of Defence (MOD) project to create a new college as well as the redevelopment of its Princess Royal Barracks, in Deepcut, Surrey, for which HLM is also architect and masterplanner.

Chris Liddle, lead designer for the project and Chairman at HLM, said: “The new world class DCPLA will create a total living, working and learning environment, with a clear sense of place, military ethos and belonging that brings the very best training foundation to the future of our armed forces.”

The college will combine the training facilities at the Defence Maritime Logistics School, currently at HMS Raleigh in Cornwall, and the RAF Supply and Movements Training Wing, based at RAF Halton near Aylesbury, relocating them to Worthy Down. It will include new facilities such as a training college; junior ranks mess; combined officers’ mess, and regimental headquarters of Royal Logistics Corps and Adjutant Generals’ Corps with a new site entrance building to a museum for the Royal Logistic Corps.

Talking about the project, Nick Nichols from the DIO said: “We are pleased to be working with HLM and Skanska to deliver this new facility which will enable MOD to train personnel more effectively and efficiently so that they can provide the best possible support for military operations.”

A dedicated military heritage landscape has been created to enrich the connectivity of work and life within campus grounds. New homes have been designed to form part of a series of villages – one for junior ranks, senior non-commissioned officers, and officers – creating an environment that supports comradeship while also providing the comfort attributed to modern, high-quality accommodation in a thriving community. Items of military heritage and precious memorabilia will be positioned around the training areas to help foster military ethos and belonging in the young trainees, and to represent the history and tradition of this special branch of the armed forces.

Skanska will deliver the facilities in phases, enabling the site to remain live and in operation during construction, and HLM has designed the site to ensure it is capable of future expansion while in use.

The Defence Infrastructure Organisation (DIO), the MOD’s property and services provider, originally awarded the contract to Skanska and HLM in 2014. As part of the wider scheme, the Deepcut site will be redeveloped to provide 1,200 homes, a school and other community facilities.

The project team is aiming for a DREAM Excellent rating on all buildings, and work is set to conclude by August 2019 with the development at Deepcut ongoing until the community there is fully established.