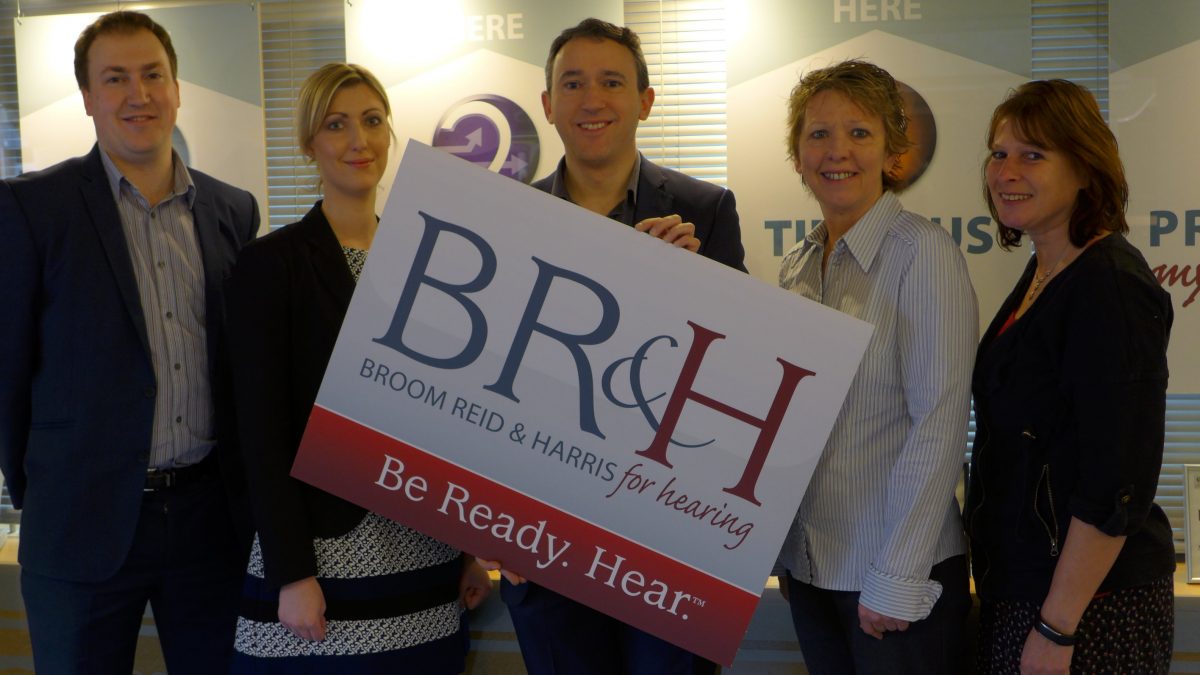 Broom Reid & Harris was established in 1841 on Queen Street, Exeter as a Victorian Chemist.The shop moved from the original site now occupied by Marks & Spencer, to the mezzanine floor of the Guildhall Shopping Centre in the 1970’s. Originally specialising in pharmaceuticals the firm also sold optics, cameras, binoculars, barometers and even artificial eyes and kneecaps!

Many artifacts such as a wonderfully preserved Victorian medicine book, handwritten with recipes to treat the ailments of the day, can still be seen at the shop. In 1924 hearing aids were introduced and Broom Reid & Harris was at the forefront of the pioneering development of hearing care; witnessing the progression from primitive ear trumpets right through to today’s ultra-discreet and intelligent hearing systems.

Derek Bond, a retired manager from Lloyd’s Bank has been a client with Broom Reid & Harris for 47 years.He says: “Hearing technology has changed enormously in the last half-a-century since I have been a client of Broom Reid & Harris and today my hearing aids are inconspicuous and discrete.Curtis is very professional, extremely patient and courteous; a real gentleman.He perseveres until he gets it just right, going the extra mile to make sure the hearing appliance is a perfect fit and comfortable for the client.Highly knowledgeable, he lectures abroad and we are very fortunate to have someone of his calibre and expertise based in Exeter.”

The move on to Palatine House in Sigford Road, Matford Park, is an exciting new era for the company as it re-brands as ‘Audify’, pioneering a new approach to hearing care that promises to become as routine as visits to the dentist and opticians.

Curtis Alcock – Owner, Broom Reid & Harris said: “Although it is sad to be leaving the City-Centre which has been our home for over 170 years, I am very excited about the move to our new state-of-the art premises in Marsh Barton. It gives us an amazing opportunity to return to our roots as pioneers, not only delivering the latest in cutting-edge technology but also enabling people to get the very best out of it. The centre will be very futuristic yet retain traditional Broom Reid & Harris values of excellent customer service and attention to detail. We’re introducing technology and ground-breaking acoustic design to the UK that has never before been seen in hearing care anywhere in the world and it promises to be a real foretaste of the future.”

He adds: “Aviva, the developers of Guildhall Shopping Centre, have been very supportive in the move, helping us find new premises. They also assisted with negotiations on the new lease and getting planning consent from Exeter City Council to convert from office use to a Healthcare Centre. We are very grateful to Aviva for their assistance and support.”

Andrew McNeilly, Centre Manager, Guildhall Shopping Centre said: “Although Aviva is a global company, they are very mindful that business is about people. With this in mind, it is very important for us to support Curtis as Broom Reid & Harris has supported the Guildhall Shopping Centre since the 1970’s. The new premises means he is less constricted in size and he has a huge amount of scope to develop the company. Curtis is very well respected in the profession and he champions new technology. The Guildhall will continue to promote his business over the next 12 months via social media, our website and also with visuals of ‘Mr. Broom’ in various locations throughout the shopping centre. This is to ensure that Broom Reid and Harris loyal customers are fully aware of the new move and are able to fully benefit from the additional levels of care and technology the newly launched and re-branded business premises offers.”