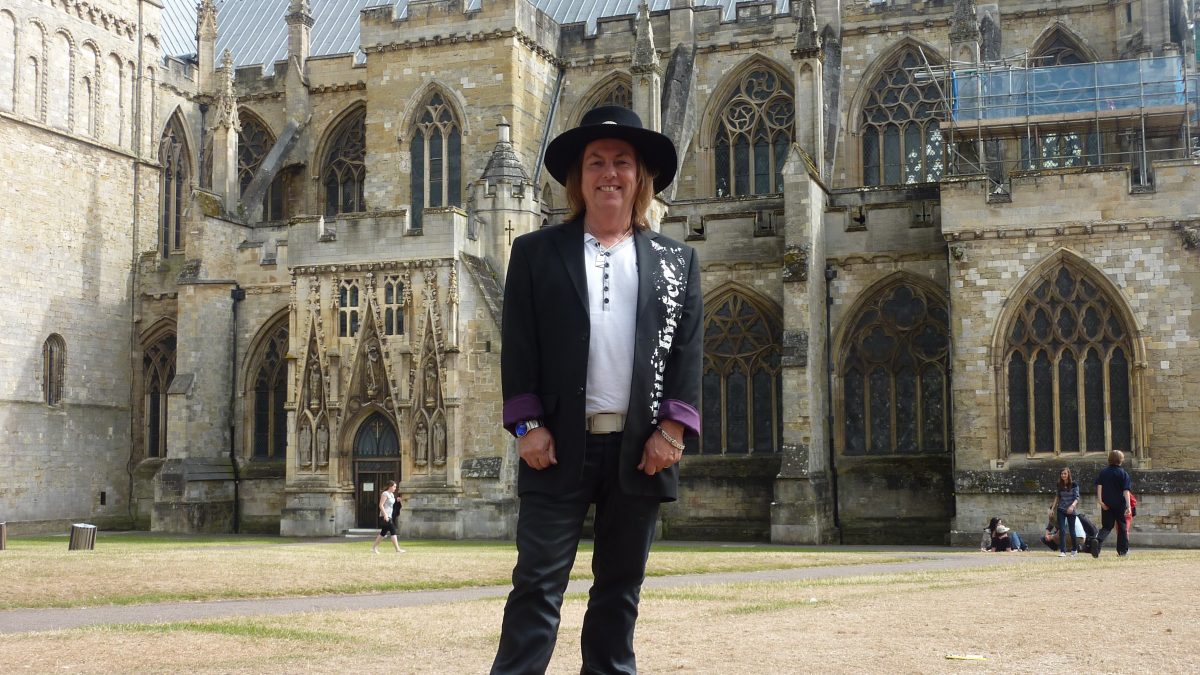 Take Me Back “Ome”

Glen King travels to Wolverhampton to meet Dave Hill of the legendary group Slade and discovers his Devon roots!

Cast your minds back to the glittering seventies when flamboyant outfits including funky flares and ankle breaking platforms meant GlamRock was as much a fashion statement as it was a musical phenomenon. Famed for his pudding bowl haircut and a fashion sense that would today leave Lady Gaga in a state of shock is Dave Hill, one quarter of the foot stomping Slade and still going strong at the age of 64….

Dave remembers growing up on a council estate in Wolverhampton, strumming the first guitar he bought for 7 from Kays Catalogue and meeting up at the local youth centre to ‘make a row’. But at the tender age of eight Dave discovered life for him started royally in a castle at Ermington near Plymouth before his family moved back to the Midlands when he was just one year’s old.

“The war was over, Mum was pregnant with me and Dad was offered a mechanics job at a garage near Kingsbridge. It sounds quite fantastic really being born in a castle, but it was actually a maternity ward. Plymouth Hospital had been badly bombed and so Flete House at Ermington and owned by Lord Mildmay was opened up for women to have their babies. I went back to see it a few years ago with Don Powell, my drummer and our wives. It was such an experience to go and see such a wonderful place and meet some charming people.”

So it seems Devon is quite close to your heart. You’re coming to play in Torquay this summer, I believe it’s actually where Slade played some of its earliest gigs?

“Yes that’s right. It would take us all night to get there. It was before the days of motorways and the road to Torquay was like the road to Cairo! It was like a Bob Hope and Bing Crosby film on the road to somewhere. We used to stay at the Beverley Caravan Campsite and go down every night and play the 400 Ballroom. I remember The Tremeloes who were number one in the charts were playing there and they said to us ‘Do you mind if you go on after us?’ and this is The Tremeloes! And we’re going, ‘What! We go on after you!? But you’re number one in the charts!’ I think they must have had somewhere else to be! At that time we had five members in the group with Noddy as a second singer. Our next gig was at some club in Plymouth and the main singer got lucky with a Torquay girl and stayed behind so that was the first time we played as a four piece which worked much better so this area is very close to my heart.”

In the seventies Slade scored an incredible 17 consecutive Top 20 hits, six No.1 smash hits and sold more singles in that decade than any other group. What was the highlight for you?

“Our first number one. Like most bands about to have success, we had no money and were all still living with our parents. We’d had a hit with ‘Get Down Get With It’, which was our first hit but the next one ‘Coz I Luv You’ just took off! I remember standing on the top of the Mander Centre in Wolverhampton pointing to the sky for a photograph with the Express and Star saying ‘They’ve hit number one!’

One song you’ll always be known for is Merry Xmas Everybody, almost forty years on do you love it or hate it?

“Oh no I love it! You’ve got to love something that does so much for people like that song. It was released in 1973 when there were a lot of strikes. Britain was on a low and it lifted the spirits of the country. And no one wrote Christmas rock Page 3 of 3 songs, it was all jingle bells in those days. The thing is you’ll never get forgotten, and I can go to anybody’s house in December!”

Slade’s original line-up has changed slightly and you’ve lost front man Noddy Holder, how different, if at all is your sound today?

“I think you’ll find it very close. Nobody replaces Nod, nobody could replace any of us. We can do all the old songs and we can do them well. The music lives on and as long as you have a respect for what you do. I wouldn’t do it if I wasn’t good enough. As a guitarist hopefully you get better as the years go by and I still have that fire and Don is a great drummer, a unique drummer and it would be a shame not to be doing that.”

Whether it’s original Slade fans coming to see you and reliving their youth or new and younger fans, your music has such a feel good factor.

“People will say to you, ‘thanks for making my youth great’ and that’s a good line. The way we wrote, love songs or rock songs, they were uplifting, lyrically interesting and melodies you remember. There’s a line in a Shirley Bassey song and she sings ‘I bought a ticket for a lifetime’ and that’s what I felt I did buy. I bought into it for the whole of my life until I’m unable to do it. It’s not about the fame for me, it’s about the people. It’s about what you do and the difference you make.”