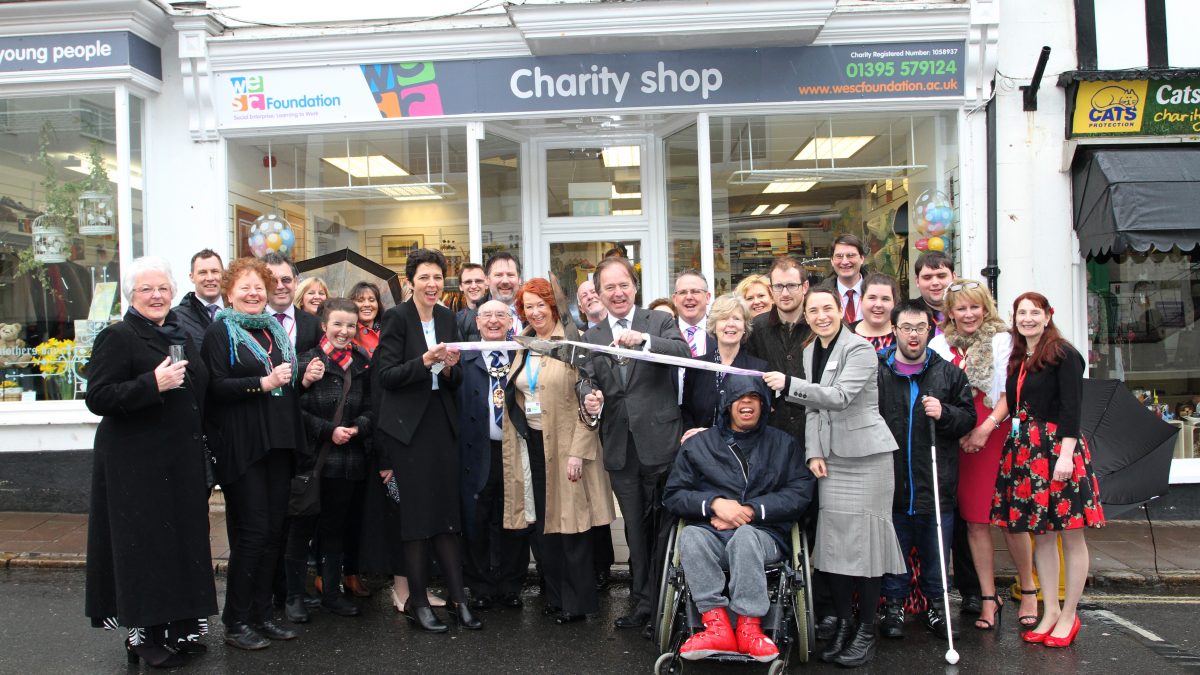 The Rt. Hon. Hugo Swire MP for East Devon, carried out a ribbon cutting ceremony to officially open the new social enterprise charity shop for WESC Foundation – The Specialist Centre for Visual Impairment, in Sidmouth.This is the fourth social enterprise for the charity with other outlets based in Heavitree, Honiton and Exmouth, each run by professional retail manager/trainers and assisted by a team of volunteers selling a large range of quality items including electrical goods.

WESC Foundation based in Exeter, is a school and college that supports visually impaired learners, many of whom also have complex needs, from across the South West and UK as well as providing outreach services to mainstream schools and research and development, adult services and a professional development centre for hire to the community.

Following the official opening, VIP guests including local councillors and dignitaries, joined WESC staff and learners for a light lunch at the Kingswood & Devoran Hotel located on the seafront.A number of presentations were made with guests learning more about the services provided by the WESC Foundation and how, through their social enterprises, visually impaired learners are given the invaluable opportunity to gain work-based skills.

The Rt. Hon. Hugo Swire MP said: “As Vice-President of WESC Foundation, I try and get as fully involved as I can to help raise the profile of this very worthy charity and I am delighted, therefore, to officially open the Sidmouth outlet. The social enterprises are so much more than just yet another charity shop; they provide an excellent retail environment to help visually impaired learners to build confidence and encourage independence.The learners will also gain a range of social skills and learning opportunities, including meeting and greeting customers, learn practical and operational skills such as working the till and the day-to-day running of a busy shop.”

In January 2010, WESC Social Enterprises opened its first shop in Heavitree, Exeter with Honiton close behind and Exmouth followed in October 2013 and Sidmouth at the end of 2014. It was the first specialist education provider to realise the benefits of operating real retail environments for learner social and vocational development.

Learners work in real working environments under instruction from Managers/Trainers that are experienced retail managers and trained to work with VI learners.WESC Social Enterprise is committed to working with VI individuals of all ages.

Tracy de Bernhardt Dunkin, Principal and Chief Executive of WESC Foundation said: “We have invested considerable resources to ensure that staff are appropriately trained to develop the skills of the young people with visual impairment in a real retail setting. 70% of the adult volunteers are either blind, visually impaired or have another disability, demonstrating our commitment to social investment.We are delighted, therefore, to now be part of the Sidmouth community, based in the busy High Street. It has created another real shop environment for our learners to become more involved in the local community and into a real life context.Sharon Green, the shop’s manageress offers a warm welcome to all and I would like to take this opportunity of thanking the Sidmouth community for their generous support, both in terms of donated stock and also purchase of goods at the shop which has helped us enormously.”

In addition to the four VI accessible shops, there is also an EBay on-line enterprise operated from the WESC Campus in Topsham Road and co-ordinated by Mark Vandenberg, a registered blind Ex-WESC Learner. The charity also employs two visually impaired Social Enterprise Supported Interns who are learning to manage on-line and high street retailing.

Andrew Roberts, Vocational Enterprise Manager – WESC Foundation said: “We started the EBay shop as an initiative in 2010 for those with mobility issues who couldn’t access the shops. In 2012, we introduced a supported placement role for EBay and in February 2013 the shop went live with Mark Vandenberg running it.”

The pioneering charity also developed and introduced the very first touch-screen tills, which are colour-coded with large block buttons and icons, and incorporates a braille adaption for learners at each of their four social enterprise outlets.Andrew was involved in the development of the initial concept and design.He adds: “To our knowledge WESC is the only retailer in the UK to have adapted their tills to work with braille overlay.The colour-coded buttons make life easier for our learners, such as ‘pink’ for ladies fashion, ‘blue’ for men and ‘brown’ for furniture.A clear cover sits a couple of millimetres above the screen and this enables those with no sight, to operate tills independently and can still be utilised by sighted-people as the print below shows through.In addition we have developed an App. This is now managed by Harry Roberts and Mike Keeling our Interns and can be downloaded free from Google Play or Apple App Store by searching for WESC S.E.D.”

He further comments: “We have worked with other specialist education providers to provide work experience for their learners. To meet the demand for placements and to fund future WESC Social Enterprise projects, our mid-long term plans are to open a further six shops. The main unit will be situated in central Exeter and accessible to all of our WESC learners regardless of disability.”