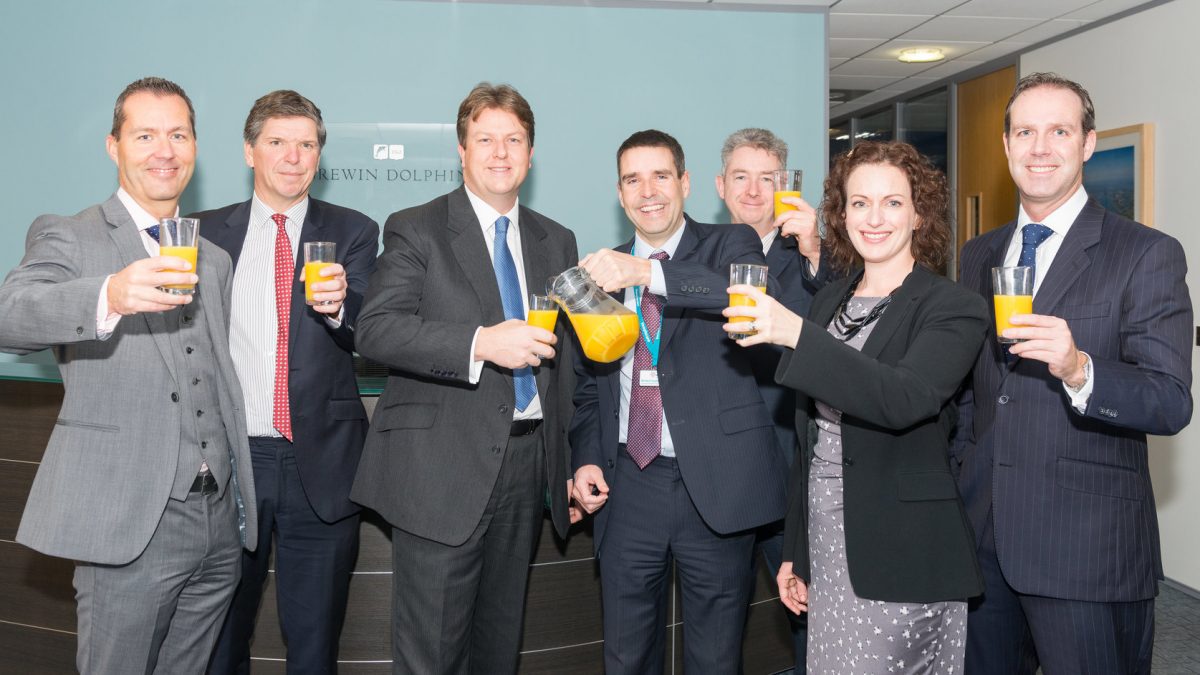 Directors and investment managers at Brewin Dolphin Exeter and Taunton office, raised a glass of orange juice to toast Hospiscare as their new charity of the year for 2016. The wealth management company is kick-starting the New Year with a ‘Dry January’ in support of the local charity’s ‘Lose the Booze’ campaign to help raise funds. In 2015 Brewin Dolphin Exeter office raised just under 2,000 for The British Red Cross and throughout 2016 they will raise further funds for Hospiscare as their newly elected charity of the year.

Hospiscare is a local charity, delivering specialist palliative care, easing pain for people with terminal illnesses and providing emotional and social support to their loved ones. Working across Exeter, mid and east Devon, the charity cares for patients who are terminally ill and is there to help people make the most of their lives despite the limited time they have left.

Following the festive period of Christmas celebrations, Hospiscare is running the ‘Lose the Booze’ campaign throughout the month of January with people being asked to pledge to give up alcohol to raise money for the charity. Those taking part can either get sponsored to abstain for the 31 days of January; ask friends and family to buy them a ‘virtual’ drink at the pub by donating the cost to the fundraising total, or donate the money they would normally spend on alcohol themselves throughout the month.

Richard Cousins – Hospiscare, Corporate Relationships Manager said: “Last year we cared for 2,235 people across Exeter, East and Mid Devon, with all of our services being free of charge to our patients. Our annual costs amount to over 6 million, of which we need to raise 5million from voluntary donations – that’s over 13,000 per day! I am absolutely delighted therefore that Brewin Dolphin Exeter has chosen Hospiscare as their charity of the year for 2016. Support from organisations such as Brewin Dolphin is very valuable to us, not just for the fundraising activities undertaken but also for raising the profile of Hospiscare in the local community. I am particularly grateful to the Directors and Investment Managers at Brewin Dolphin who are backing the ‘Lose the Booze’ campaign by abstaining from drinking alcohol throughout January. The funds they will raise are crucial to the patients that Hospiscare work with.”

Tim Walker, Divisional Director and Head of Office Exeter Office comments: “We are very pleased to be raising funds for this worthy charity in 2016. Hospiscare is a highly-regarded local charity and we wanted to show our support and solidarity by taking part in the ‘Lose the Booze’ campaign. With the merger of the Taunton and Exeter offices we now have a larger team to help raise money and all the staff are very much behind supporting the charity throughout the year.”

‘Lose the Booze’ campaign Text ‘LOSE’ to 60777 for a fundraising pack.

See Coverage in the Express & Echo