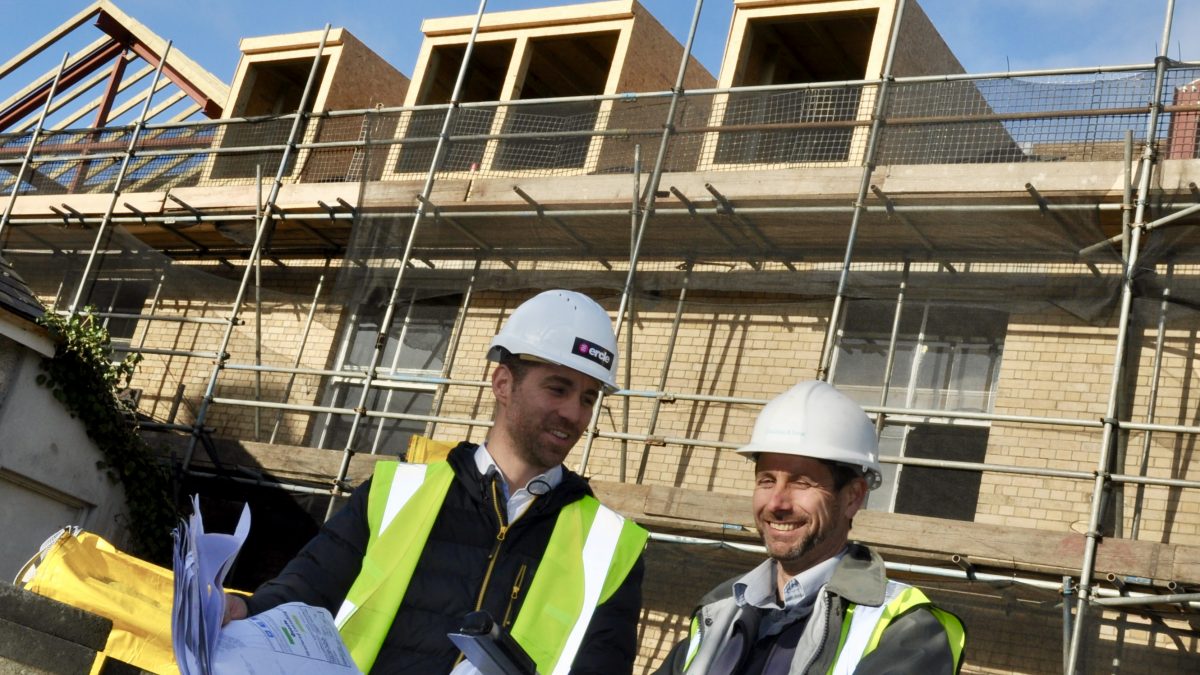 Plymouth-based architects Ercle are working with clients, Chris Gait and builders Goulden & Sons, to deliver the final building conversion on the historic Millfields Estate, a former Naval Hospital, originally built by French Prisoners of War (POW). The impressive conversion of the whole site began in 2000 and 17 years later in August 2017, conversion began on the Old Dispensary into 12 luxury and spacious apartments.

The Old Dispensary arguably the most ambitious scheme to-date, to be delivered on the site, is surrounded by listed buildings and embedded in a listed landscape. The scheme has quietly been constructed from the inside since late summer, and has recently seen the stripping-back of the roof for the insertion of new dormers. Ercle, an innovative architectural practice, has inserted a number of contemporary zinc clad dormers into the roof space, to dramatically transform the building.

The conversion project is a joint venture between South West-based Goulden & Sons Limited, a well-respected contractor specialising in high-quality developments across the region, and Chris Gait, a local developer who recently completed a high-end conversion of three flats at Fort Picklecombe, in East Cornwall.

Ercle architects – specialists in bespoke residential work, are ideally placed to oversee this exciting new project as they have a bird’s eye view from their office in Creykes Court adjacent to the site.

Ercle director, Eric Davis said: “It’s very exciting to be working on this conversion project within the historic Millfields estate, where we’ve had offices since 2015. Being appointed as the architects for this project, came as a result of a chance meeting with Chris Gate at the open-house for the building. As architects we rarely work on a project so close to our work premises, and it’s given us the ability to have a real hands-on approach.”

There are 15 operatives, all local to the area, working on the project. South West contractors Goulden & Sons Limited, a third-generation firm founded in the 1930′, has been on site for a few weeks, and the roof has now been stripped and is totally open, ready for the structure to go in for the main dormers.

David Goulden – Director, Goulden & Sons comments: “It’s a wonderful building, however a restricted site, which has had its challenges. We have utilised existing materials wherever possible, including adapting the existing roof structure to create three Penthouse apartments, which have wonderful views. The original grand staircase is being renovated to bring it back to its former glory, which adds grandeur to the entrance to the development. Using the original timber trusses, we’ve created flitch beams, a vertical steel plate sandwiched between two wood beams, to strengthen the roof and ceilings, which are 4.2 metres high. There is a new slate roof and we have locally sourced bricks to match the original 150-year-old Imperials. ”

Eric Davis concludes: “The forward thinking historic building team at Plymouth City Council have been very supportive of the concept of the contemporary insertion into this heritage building – resulting in a fantastic project. Working collaboratively as a team with a client who is open to new ideas, and with a local contractor who has an attention to detail, has created a synergy which will result in a truly unique project. Ercle is very proud to be the Architects giving the Old Dispensary a new lease of life.”

See all about it on YouTube: Eric Davis – director of Ercle Architects and David Goulden – director of Goulden & Sons are interviewed at the Old Dispensary building site at Millfields Trust.

Read all about it: The Herald online

Read all about it: Devon Live