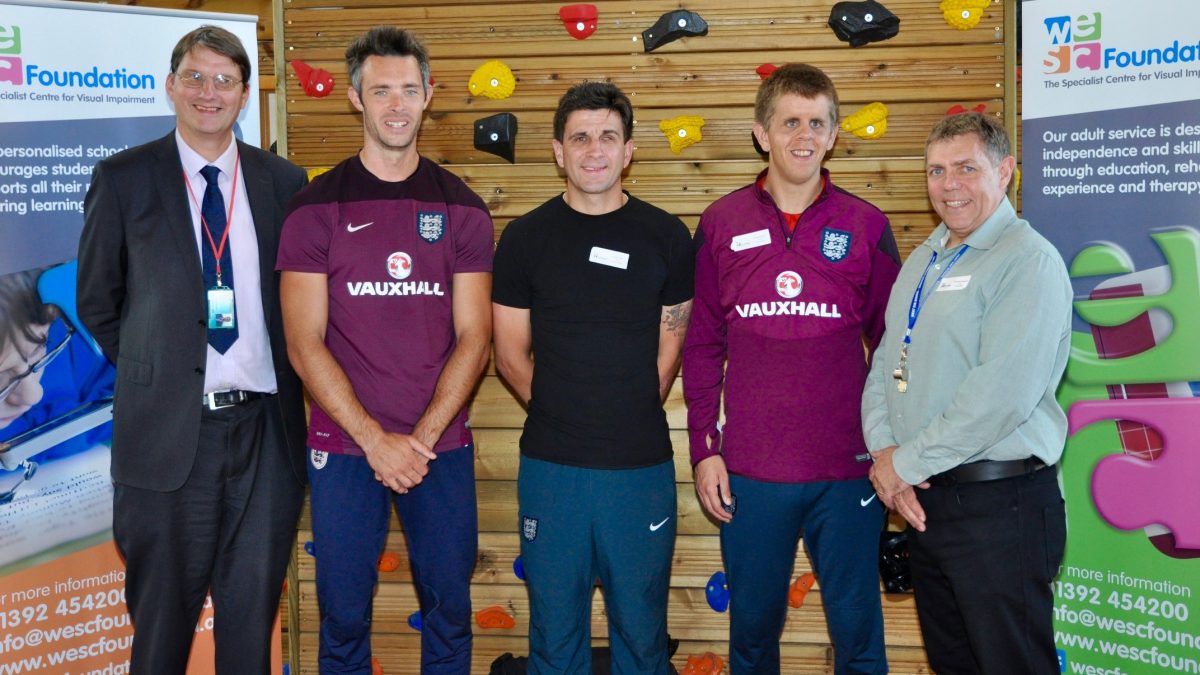 The Visual Impairment Challenge was jointly organised by WESC and Listen2Win, an Exeter-based company that specialises in training and developing businesses listening and communication skills, as well as disability awareness. The training organisation developed by local businessman Richard Carpenter, and the England Blind Footballers, Keryn and Robin, held the VIC in collaboration with WESC, to raise awareness of disabilities in sport.

Speaking about the event Richard Carpenter – Listen2Win said: “It’s a great way of companies challenging their teams, going head to head with other businesses, having fun and raising money for brilliant local causes.”

The sport event was based around three different areas of the WESC Campus, with teams taking part in activities on the indoor climbing wall, the outdoor running track and five-a-side football pitch. Local businesses including: WMW Digital; Francis Clarke; The Training Partnership; Hedgerow Marketing and Thomas Westcott, were challenged to a sightless dash, blindfolded relay and penalty shootout, and raised a total of 1600 split between WESC and Listen2Win.

Stuart Carrington – Partner, Thomas Westcott said: “We took part in the Visual Impairment Challenge last year and found it to be both an exciting and challenging opportunity. We are always more than happy to support WESC and the outstanding work that they do.”

Speaking about visual impairment in sport, Dan James – Sighted Goalie, England Blind Football team commented: “The professionalism and the dedication of players is inspirational, playing alongside my blind and visually impaired team mates has made me view disability in a different light. I was a teenager when I started playing with the blind football team and I saw how the players didn’t let their disabilities hold them back. All of the players are seriously committed and inspirational. Playing for your country at any level is a great honour and is very rewarding. We have now become a full time professional sport, and have gone to two Paralympic games and multiple tournaments across Europe and around the world. The sport has enhanced my life and I feel very fortunate.”

Once the head-to-head competition had been completed and The Training Partnership were crowned the winners, guests enjoyed live music and refreshments on the green.

Jon Duckham – Fundraising Manager, WESC concludes: “This is the second time that we have held the Visual Impairment Challenge with Listen2Win, and we have been delighted with the enthusiasm that the businesses taking part have shown. The event is a great way to give people a real understanding of what it is like to be visually impaired, and it often surprises people just how vulnerable you can feel once your sight has been taken away from you. I want to thank everyone for taking part, and congratulate the winning team, The Training Partnership.”

See coverage on The Plymouth Daily

See coverage on The Exeter Daily