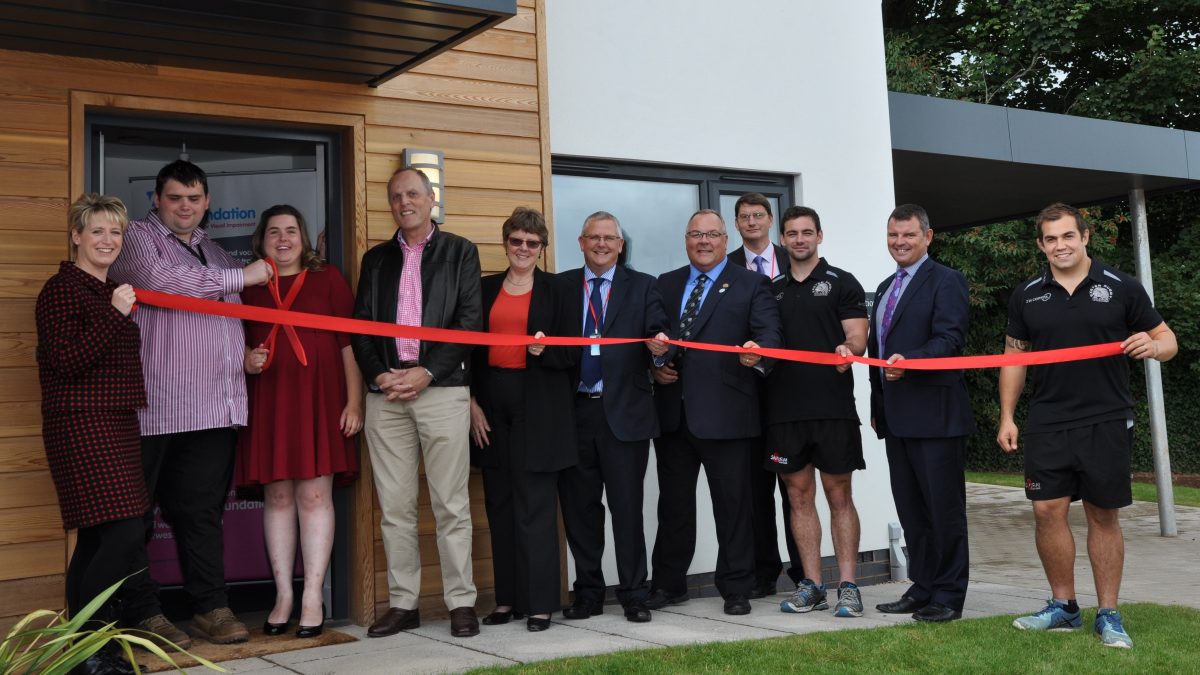 WESC Foundation, a school and college for children, young people and adults with sight loss is a specialist centre for Visual Impairment.The charity’s aim is to develop its learners’ independence so that they can develop academically and socially, whatever their ability and expand their services to offer supported housing to a wider range of people with visual impairment and other disabilities.

The two new state-of-the-art properties are located just one mile from the WESC Foundation campus and comprise a two-bedroomed wheelchair accessible house and a five-bedroomed house for those more ambulant.The five-bedroom house has been named ‘Maxwell – Lawford Lodge’ after Nicholas Maxwell-Lawford, a Vice President of WESC and the name of the two-bedroom home was unveiled as ‘Foundation House’.

Built by Heritage Homes at Holland Park, Old Rydon Lane, Exeter, the two homes are allocated to young people with a visual impairment as they strive towards an independent adult life.

Heritage Homes Development Director, David Lovell said: “Heritage is a locally based company employing all local contractors and both our Operations Director Andrew Martinovic and I are keen to support the local community. When Mark Cornfield, WESC Deputy Principal, who I have known for many years, told me of the need for these specialist homes, we were delighted to be able to design these cutting edge ZERO Carbon homes especially for the needs of these deserving young people.”

The official cutting of the ribbon was made by former WESC learners, Maria Dowswell and Harry Roberts who, as girlfriend and boyfriend, are going to move in the wheelchair accessible ‘Foundation House’. Maria 22, suffers from Retinal Dystrophy and has been at WESC Foundation for five years, starting at the College at the age of 17.Harry 20, has been at WESC since 2003 where he started at the age of eight.Originally from Reading, his family moved to Devon so that Harry could attend WESC from an early age.

The properties boast the latest state-of-the-art systems for young people with sight loss and complex physical needs, allowing them to be able to support themselves as independently as possible. Maria and Harry’s new accessible home also has the addition of a lift to the upper floor and both houses will benefit from a zero carbon energy rating due to the Solar PV system.

Maria Dowswell comments: “When I first heard about WESC’s new transition houses, I thought it would be a good base for Harry and I, so asked if we would be able to live together there, and to my delight the answer was ‘Yes’!”

Partnership working has been key in enabling WESC’s ‘Satellite’ Landlord Supported Living Houses to come into fruition and the charity was fortunate to have won the Exeter Foundation’s Legacy Project Grant fund of 50,000 to adapt the two new houses.Additional funding for the homes also came from many other foundations and charities, including the Claire Milne Trust, Garfield Weston Foundation and The Alice Ellen Cooper Dean Charitable Foundation.

Mark Cornfield – Deputy Principal and Director of Finance & Resources comments: “We received fantastic support from Exeter City Council Chief Executive, Karime Hassan and Housing Development Manager, Emma Osmundsen, who worked with us to enable these homes to be provided at low cost through their Affordable Housing Policy. We very much hope that Exeter City Council will continue their brilliant support for this very important need.”

Cllr Rob Hannaford, Exeter City Council’s Lead Councillor for Housing Revenue Account adds: “As the strategic housing authority, Exeter City Council are keen to encourage supported housing opportunities across the City to meet housing needs. We are delighted to support this development which assists young adults into specialist move on accommodation to enable them to transition to independent living within the local community.”

Tracy de Bernhardt Dunkin, WESC Foundation’s Principal and Chief Executive concludes: “I am extremely thankful to Exeter City Council, Exeter Foundation, and Heritage Homes, and to all my hard working team at WESC for making it possible to develop our new state-of-the-art Satellite Supported Living Houses. It’s fantastic to be able to offer young people a new route into independent living whilst still giving them the option of receiving support from us based on their individual needs. I look forward to seeing the young people flourish in their new homes.”

See Coverage on The Exeter Daily