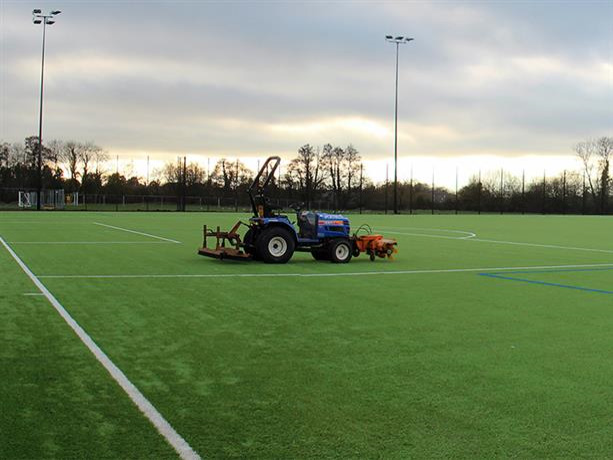 The installation of the ground-breaking 3G pitch at City’s Cliff Hill Training Ground is almost at completion, thanks to the hard work of NPS, Sportfields, Desso Sports and the Exeter City Grounds team.

The state-of-the-art pitch has been built to the same size as the playing field at St James Park using a contemporary cork infill surface.

The pitch will benefit the club greatly as it will enable the first team to train effectively during the winter months, and be a facility that Exeter City’s Academy, Football in the Community charity and the Ladies team will be able to use all year.

Speaking on the ground-breaking new pitch, City manager Paul Tisdale said: “It’s one of the biggest achievements we’ve had at the club in the last 15 years in putting this kind of facility on our training ground.

“It’s the first of its kind in the country” added Paul. “We have spent big, you get what you pay for, and we’ve paid for it. We’ve earned it. It’s going to be fantastic for the club, and most of all it’s going to improve the level of the facility that the club trains on; from the youngsters, right the way through to the first team.

“We are going to have the first pitch of this type in the country, FIFA internationally approved, it’s brilliant – one of the biggest achievements certainly since I’ve been at the club, that we’ve managed to produce.

“You have to get a balance and it’s about making sure the club moves forward, steady progress and this is a massive step for us which has taken many years to get to”

The 3G pitch is expected to be completed and handed over to the club on the week commencing 19 December with a commemorative photo shoot planned to take place the Cliff Hill Training Ground.