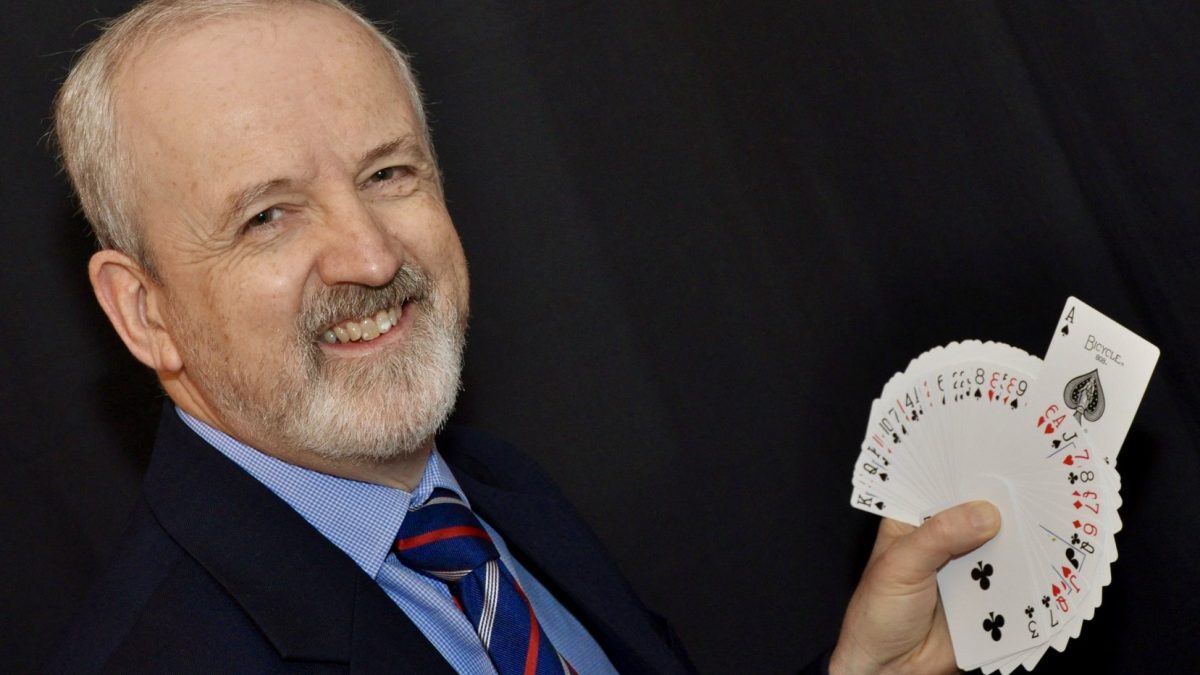 With over 30 years experience, local strolling magician Mark Leveridge is launching a new magic skills technical workshop in Exeter. Mark, who belongs to the illustrious Magic Circle in London, is also a member of the prestigious Inner Circle, with a Gold Star for high technical performing ability. The first of the new workshops is called ‘Let’s Make Magic’ and is aimed at children aged 11 – 17 years, and will run from 2 – 5pm on Sunday 7th February 2016.

An international speaker, Mark lectures and teaches magicians around the world, and he is also the co-owner and editor of ‘Magicseen’, a specialist magazine for magicians, now in its 11th year. He has also written books on magic, produced DVDs and invented and marketed hundreds of his own tricks.

Mark Leveridge said: “I was given a box of magic tricks as a present when only six years old, and was totally hooked! From the age of ten I was being asked to perform magic shows for friends and family at parties and it’s amazing to think that after those early beginings I have now been earning my living from magic for over 30 years. I feel very honoured to be a member of the Magic Circle, which is arguably the oldest magic club in the country, and especially to be an Inner Magic Circle member, as it is an invitation only section of the Circle with a very limited number of members allowed at any one time.”

Mark, who is also a qualified teacher, will be running the new venture in a purpose-built classroom based in central Exeter. The afternoon workshops will include some of the fundamental skills of the trade with a focus on sleight of hand techniques, including coin and card handlings, plus he will explain how to deliver a trick professionally in order to captivate an audience.

As well as sleight of hand techniques, Mark will also provide specialist props for tricks that he has created himself and he will teach the students how to perform the tricks so that they will go away at the finish with something that they can perform to family and friends.

Mark comments: “I have run bespoke magic workshops and presentations for schools in Exeter. These were very well received and so I felt motivated to launch this new range of magical workshops for young people, which I believe will be one of the first of their kind in the South West. I want to inspire youngsters to take up magic at an early age, just like I did, as learning magic will also teach them valuable life skills. The workshop has all the promise to be fun and enjoyable and a great chance to make new friends, improve social interaction, and boost self confidence. My new magic apprentices will leave with a number of tricks up their sleeve together with a complimentary pack of magician’s cards, a copy of ‘Magicseen Magazine’ and a special magic prop so that they can continue to perform and perfect one or two of the exciting tricks they have learned under my instruction.”

To book: On-line at www.markleveridgemagic.co.uk/mlmacademy.php

Read all about it: Magicseen Magazine

See coverage in the Express & Echo

“I was looking to promote the exciting new launch of a series of Technical Magic Skills Workshops aimed at children aged 11 – 17 years. The team at Glen King created a highly effective PR campaign with a full PR mix, including being filmed by BBC Spotlight; a radio interview with BBC Radio Devon aired on the Simon Bates show plus many press releases and features. This was both pre and post-event and coverage was gained in all the local lifestyle magazines and newspapers as well as extensive social media promotion. The excellent PR Glen King achieved not only promoted the new workshops but also helped to raise the brand and profile of Mark Leveridge Magic as a strolling magician. In addition, Glen King PR took some excellent photographs of me doing tricks to use for the PR campaign, which I have also been able to use on my website and for other marketing purposes” Mark Leveridge, Strolling Magician, Exeter