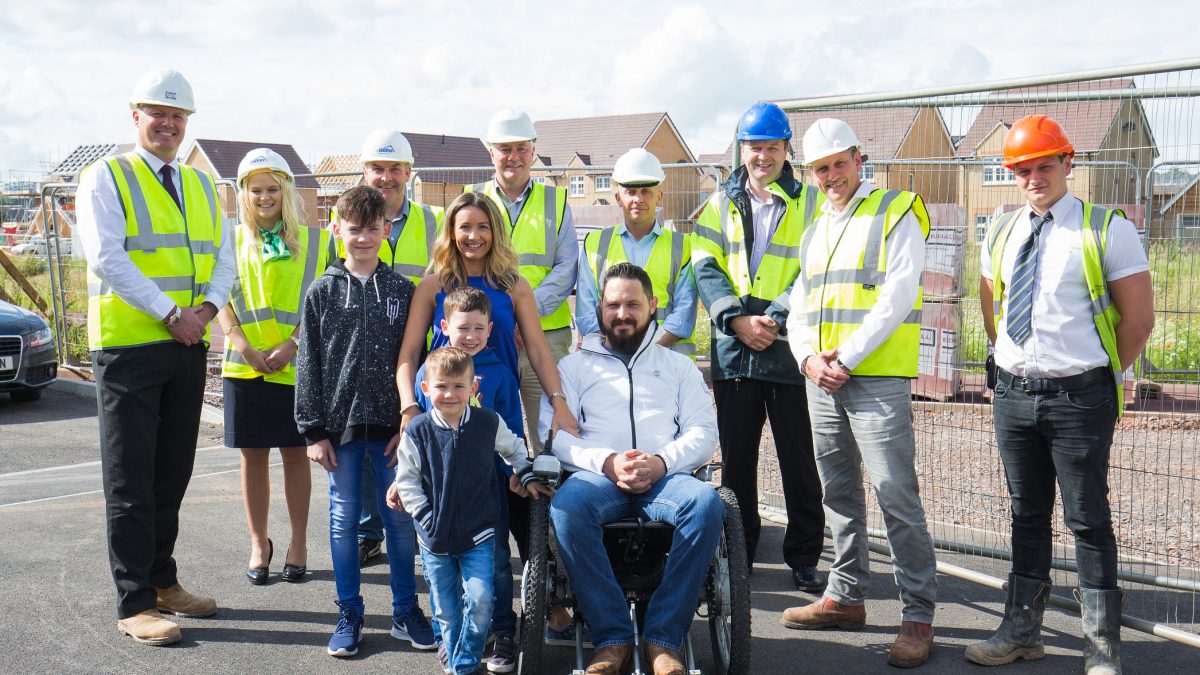 Five years ago, whilst serving with the Royal Marines in Afghanistan, Corporal Phil Eaglesham contracted Q Fever. This relatively rare disease is degenerative and has already resulted in Phil becoming wheelchair bound.

Phil, his wife Julie, and their three boys, Travis 13, Tyler 9 and Mason 6, live in Taunton. However, their current home is becoming increasingly inaccessible for Phil. As his condition deteriorates simple things like tucking his children in at night are becoming impossible.

The Royal Marines Charity realised that the most important thing was to keep the family together, and in order to do that, a specially adapted home would be needed. The only way to achieve the bespoke home that Phil and his family so desperately need was to build it from scratch.

Sharky Ward, DCEO of The Royal Marines Charity said: “As a relatively small charity we had to take an intelligent approach to support the Eaglesham family, and have actively sought support from the construction industry. Thanks to the incredible help we have received from Persimmon Homes, who donated the land, Haldons Construction who are project managing the build and Grainge Architects who developed the plans, all free of charge, we can help make this dream become a reality. We are actively seeking further support from the construction industry to complete the project in the most cost effective manner.”

Phil and his family face an ongoing struggle as they all try to come to terms with the enormity of what has happened. The problems are not just physical. Phil has suffered psychologically as well. At one point it all became too much for him: “Just over a year ago I tried to take my own life. I’d just had enough of the deterioration and the impact it was having on my wife, the kids, others around me. It’s difficult to talk about it, but it’s good to talk about it.”

Despite Phil’s worsening condition, he has not given up. Mo Morris who is a Royal Marine Lieutenant, Phil’s best friend and his personal support said: “Phil has worked incredibly hard and just yesterday we were able to announce that he has secured a place in the Ireland Paralymic Shooting team. Phil will be competing at the Paralympic Games in Rio this September. Performance at the games hinges on many factors, one of which is family security, and through The Royal Marines Charity and all the companies that have helped to make building this house a reality, this has been achieved.”

Jonathan Ball, CEO of The Royal Marines Charity said: “With Phil’s future uncertain and with no way of knowing how quickly his condition may deteriorate, the Charity wanted to give Phil and his family something that would allow them to be together as a family now, but also give them a sense of security for the future.”

Phil is hugely grateful to the Charity and businesses that have made this project possible.

“Words could never express how grateful and thankful we are. Thank you could never be enough. This house gives us the chance to make a life and a future again. Even as my condition deteriorates we can still get on with our lives to the best of our ability, rather than fire fighting every issue that comes with every little change in my condition. The independence that the house layout will give me is second to none. A home is meant to be the safe place in your life and this will certainly give me that. It’s the little changes that are heart breaking. To be able to access the children’s bedrooms and bathroom. To be able to interact with my family more will also ease the pressure on them and will make me feel like the father I want to be again. The best way to say thank you will be to live as full a life as possible in the house. Making the most of the better days before these become few and far between. From the bottom of our hearts, we would like to thank The Royal Marines Charity, its supporters and everyone that is giving up their time and effort to help us with this life changing project.”

The Royal Marines Charity is seeking support from the construction industry to provide materials and services. Once finished, the house will provide a home that meets Phil’s current and future medical needs, and also provides a safe haven for the entire family.